The enduring mystery of Bigfoot has been a staple of North American folklore and conspiracy theories for a considerable time. Tales of tall, extremely hairy humanoids lurking in the wilderness still permeate modern culture with supposed sightings and recordings coming in from across the U.S., from Florida all the way to Washington.

Whether you believe in the myth of the Sasquatch or find it all to be nonsense, Alaska seems like a far more unlikely locale for the beast to inhabit.

Small Town Monsters’ latest documentary On the Trail of Bigfoot: Last Frontier looks to show that the Sasquatch is more deeply-rooted in the 49th state than many know. Collider can exclusively reveal a new clip from the docudrama showcasing one of the bizarre tales of the Alaskan Bigfoot. 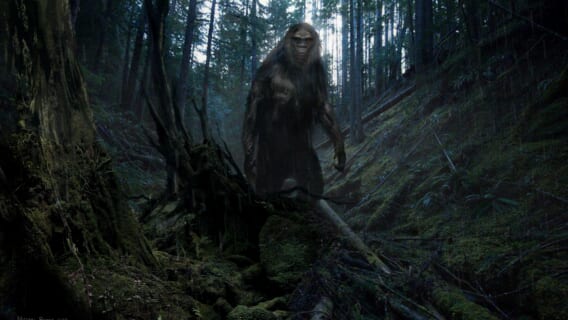 Shot across several months in Alaska, Last Frontier explores the evidence supporting the presence of Bigfoot in Alaska with a particular focus on the accounts of locals and Indigenous peoples of the state. Through interviews, eyewitnesses will give their stories and provide pieces of evidence for the crew to compile and analyze. One such story focuses on unnerving audio of what sounds like a baby crying in the wilderness, a tactic that multiple stories from native lore say is used by Sasquatch to lure its prey. The clip sees researcher and witness Fred Roehl pondering the possibility and implications of a Bigfoot using such cunning methods.

Roehl is disturbed by the possibility that a Sasquatch would mimic a baby, especially a baby that its intended victim knows, for a number of reasons. For one, it would prove their intelligence and, even worse, it would imply that the beast is hostile toward humans and capable of hunting them with traps. Furthermore, he understands the strange capabilities of the Sasquatch in the folklore of the region. He recounts an old Koliganek account of a smaller hairy man falling into a trap set by the people of a nearby village only for a woman who had been missing for some time to show up in its place after several days. It’s just one example of the bizarre lore that exists in the snowy state.

Last Frontier is just the tip of the iceberg for fans of Bigfoot and unsolved mysteries. Small Town Monsters shot the documentary concurrently with two other projects set in Alaska, Land of the Missing and Bigfoot: Beyond the Trail: Alaskan Coastal Sasquatch. Both are slated for release later this year and will take in-depth looks at other angles on the monsters that may or may not be living in the snow.

Small Town Monsters’ latest documentary is part of their ongoing On the Trail of series which features multiple documentaries exploring not just Bigfoot, but other cryptids like the Lake Michigan Mothman and U.F.O.s. Seth Breedlove both wrote and directed Last Frontier and the previous On the Trail of films along with a variety of other projects for the indie production company including The Mothman of Point Pleasant, Beast of Whitehall, and Bloodlines: The Jersey Devil Curse.

On the Trail of Bigfoot: Last Frontier will be available on demand on January 17 from a variety of platforms including 1091 Pictures, including iTunes, Amazon Prime Video, Vudu, and FandangoNOW. Check out the exclusive clip below.

You may have missed